Multi-subject photography may be the most complex language of photography in existence. The literature shows us that there are great masters in this photographic technique (see at the end a citation of great blog on the theme).

Inspired by the above mentioned blog, I decided to take a closer look at some of my photos that seemingly meet to some extent the characteristics of multi-subject photography. I hope to demonstrate some of the concepts involved and thus better understand this set of 10 photos of my own. For me, it was a great exercise in trying to better understand my own images. I strongly suggest everyone to do the same! 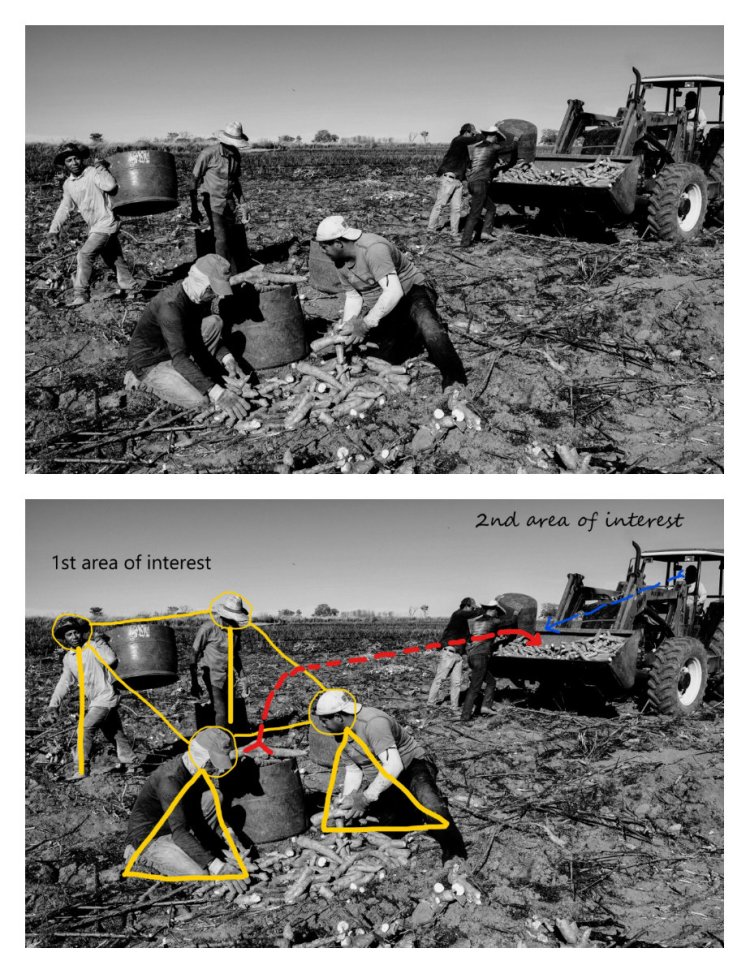 It is known that for a photo to be a complex photo there must be multiple points and areas of interest for the viewer’s appreciation.

In the present case (cassava harvesting) there is an area where rural workers are manually picking up cassava roots and placing them in drums that are subsequently carried (by other workers) to the tractor (second area of ​​interest).
The positions of different rural workers with their different job functions add dynamism to the photograph – notions of movements and interactions between the different subjects of the photo – which, in my opinion is a strong detail to capture the attention of photo observers.

These photos show rectangular and triangular compositions. A curiosity: until today, I’ve never seen anyone speak of rectangular, only triangular compositions.
The idea of ​​this type of compositions is associated with the balance and filling of the photographic frame. In some of the cases of my photos it can be seen that the filling of the frame is a question that is not perfectly met (perhaps it is the case of photo 6 that did not reach the desired balance). But even so, the composition of these photos allows the eyes of the viewers to rotate back and forth in the frame, which makes the photo perhaps more attractive and worth seeing. Photo 5 also has the attribute of 2 areas of interest (not marked on the photo).
I believe the main feature of photos 3-6 is the feeling of energy and movement that surrounds the different subjects of photography. I think this is undeniable. This gives the observers the feeling that they are in place at the time of these field harvests. I know this very well because I was there at that very moment, witnessing all the interactions among the rural workers.
These photos convey to me the feeling of how hard and heavy it is to do the manual work of loading a truck (photo 3) with almost 1,000 potato sacks weighing about 60 kilograms each. And do this repeatedly maybe 4 or 5 times a day (ie 4 or 5 trucks a day) !!! These worker are called “chapas” here in Brasil.

The next series of images constitute photographic compositions that involve energy and movement, layers, leading lines, and some juxtapositions.

In them the subjects are in some kind of movement, constant movement that ends up being an attribute of these photos that unites the subjects, which although there are no explicit interactions between them, ends up being ‘the element’ of interaction. That is, one has the feeling that it is a group of people who are there performing a series of activities in the field together, in partnership. Each witnessing the hard work of the other; talking to each other; sharing life stories among citizens who belong to that place. This feeling is the so-called belonging.

For a photographer who witnesses everything that enters the frame, he also witnesses very important things that do NOT enter the frame. Witness for example that these people – even though their work is hard and often suffered – that they perform these activities in a happy manner, which often includes singing popular songs and telling jokes to which they laugh out loud. This may relieve them of the heavy burden of the process of earning daily bread.

I realize that as a photographer I am witness to all this, and then I understand that it is often very difficult if not impossible for observers of these photographs to appreciate from all these angles and feelings.

But this, fundamentally, is the mystery of photography that will never be revealed. This is what explains a photographer’s passion for what he/she does and what makes photography universal, timeless, among many other adorable properties.

Those who were curious about the subject there is an excellent blog of 2016 written by blogger and photographer Eric Kim that is worth checking out.

I'm an amateur photographer based in the city of São Carlos, São Paulo state, SE Brazil. I used to make photographs since I was about 15-17 years old. My first camera was a Olympus Trip, an analogue camera. Many years after that I switched to several digital cameras. Presently I own a Nikon D500 with a small set of lenses and a Fujifilm X100T 23mm. A few years after my retirement as an university professor, after teaching Environmental Chemistry at the Federal University of São Carlos (UFSCar) for 45 years, I decided to invest money and time dedicating myself more seriously to photography. I´ve taken on-line courses as well as I´ve participated to various photography festival across Brazil. By far, my biggest interest is street photography. And in it, I'm interested in portraits, everyday street scenes and architecture. View more posts